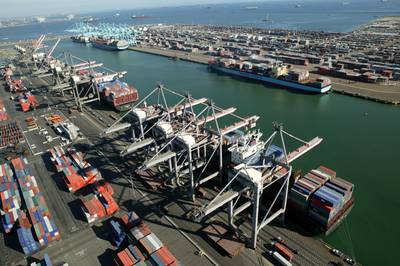 Facts mixed with omission have gone awry in the furor over the longshore union strike that caused havoc at Los Angeles/Long Beach. The most glaring misunderstanding, which has even reached the pages of Maritime Professional, is the cost of the strike.

Like parrots, everyone has been quoting a figure of $1 billion a day. As it turns out, and as repeated by the original source (an economist in Sacramento who works for Beacon Economics), this is the value of cargo going through the ports each day. Most of those boxes were merely delayed and were delivered later than planned, with most lines declaring the maritime equivalent of force majeure. Possibly the arcane, legal world of general average, or its derivatives, comes into play.

From what I can glean, the actual cost was no more than a couple of million in lost business revenue. (And the erroneous figure makes the commonly quoted $1 billion a day cost of the 2002 strike and lockout seems suspicious. That year, the value of cargo was $126 billion, compared with about $200 billion for this year. More likely, the 10-day lockout itself cost $1 billion a day because cargo was not delivered and Wal-Mart shelves were sparse. During the strike itself ships were rerouting.)

Secondly, nothing will change. Not one word has been uttered, officially or privately, about the possibility of collusion between the Office Clerical Union and the parent ILWU. It is hard to believe that the 500 clericals did not get a promise from its parent before a strike was even considered that picket lines would not be crossed. (The ILWU said in public statements when the strike became a possibility that it would “honor” the pickets.) So, the ILWU showed up each day and said in astonishment “By golly, picket lines in front of our work places. Sorry, no work today, but that’s not our fault.”

And continued to rake in a full day’s pay for doing nothing. (To be specific, the full-time dockers got paid. Casuals, who need the money most, got zip.)

Matters have also got worse from a longer-term perspective. A shipping line that I spoke to in South East Asia said: “We all laugh at the inefficiency on the West Coast. We have to deal with it but make sure we keep our exposure to the absolute minimum. That is why the newest big ships such as the CMA CGM Marco Polo go on other routes first. Offloading that at a West Coast port is just not worth it – there would be an enormously long wait.”