The live-fire sinking of obsolete warships 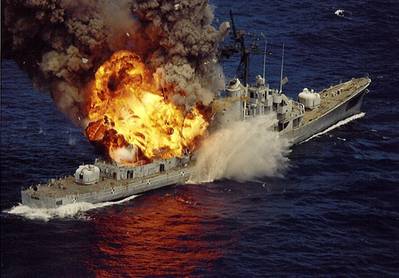 The United States Navy disposes of many of its old, obsolete, and decommissioned warships by sinking them in deep ocean waters.  This practice, called a sinking exercise or SINKEX, involves removing toxic and hazardous substances to the maximum practicable extent, towing the vessel to the intended site, and then sinking the vessel with the use of live fire.  The live fire may include gunnery, missiles, and/or torpedoes.  The target vessel then sinks rapidly and permanently to the seabed.  There are currently four locations regularly used for SINKEX: the North Atlantic off the coast of Virginia and the Carolinas; the North Atlantic off the coast of Puerto Rico; the North Pacific off the coast of California; and the North Pacific off the coast of Kauai.  All these locations are more than 50 nautical miles from land and the waters are at least 6,000 feet deep.  Since 2000, the Navy has disposed of over 100 ships via the SINKEX program.  Preparing each ship costs in excess of $500,000.  It costs about the same amount of money to conduct the weapons-firing to actually sink the vessel.  The Navy considers this as funds well spent, because it provides realistic training for its personnel and irreplaceable validation of the lethality of the weapons systems utilized.  The program, though, is not without controversy.  Environmental advocacy groups assert that the Navy fails to remove many toxic materials from the ships prior to sinking.  In particular, complaints are made that significant quantities of polychlorinated biphenyls (PCBs) are left on board.  US recycling companies complain that SINKEX diverts jobs from American workers.  The Environmental Protection Agency (EPA) and the Maritime Administration (MARAD) support the program and the US Navy contends that it is a valuable and cost-efficient program important to national defense.

BC Ferries - a Case Study in Blended Maritime Assessment - Part 1