A little-remembered earthquake and tsunami in the North Atlantic 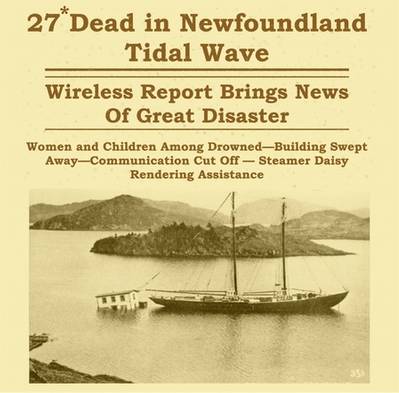 At about 5:02 pm on Monday, November 18, 1929, a 7.2 magnitude earthquake struck beneath the Laurentian Continental Slope about 250 miles south of the island of Newfoundland.  The water there is about 7,000 feet deep.  The earthquake was felt as far away as New York, Bermuda, and Montreal.  What no one realized at the time was that the quake generated a tsunami.  Sediments that had been building up for centuries on the floor of the Laurentian Continental Slope and Rise broke loose, creating an underwater landslide.  Subsequent research revealed that that approximately 50 cubic miles of sediment was removed from that area and spread over a large portion of the Sohn Abyssal Plain to the southeast by means of a turbidity current.  Research of this event was the first proof of the existence of turbidity currents and their power.  The ocean liner RMS Olympic happened to be passing over the epicenter of the quake at this time.  As documented in the ship’s log, the ship began suddenly to shake violently.  The vibrations lasted for two minutes, but no cause could be ascribed at the time.  The major tsunami spread east and south at an estimated speed of 360 miles per hour.  By the time the tsunami was detected ashore in Charleston, Bermuda, the Azores, and Portugal, its height was much attenuated.  A second tsunami was generated toward the north, striking Newfoundland’s Burin Peninsula with three successive waves of up to twenty feet in height.  These waves destroyed many houses and other structures located near the shore, as well as sinking or damaging many of the fishing boats in this sparsely settled region.  The tsunami killed at least 27 persons on the Burin Peninsula.  The turbidity current severed twelve trans-Atlantic submarine cables in over 20 places.  It took every available cable ship in the Atlantic almost a year to repair or replace all the damaged cables.