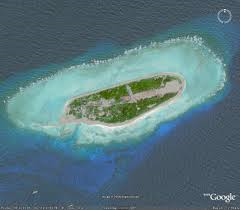 The Spratly Islands are a group of islets, cays, atolls, and coral reefs located in the southern portion of the South China Sea.  Taiping Island (also called Itu Aba Island) is the largest of these islets and the only one with fresh water springs.  Size is relative though, because it is only 1.4 km in length and 0.4 km in width, with a highest elevation of about 3 meters above sea level.  It is virtually surrounded a coral reef and the water inside the reef is shallow.  Claimed by the Republic of China (Taiwan), the People’s Republic of China, the Philippines, and Vietnam, it is administered by the Republic of China.  During World War II, the Japanese established a submarine base on the island.  It was occupied and claimed by the Republic of China in November 1946 and a Marine Corps detachment was stationed there.  In 2000, this was replaced by a Coast Guard detachment.  An airport, sufficiently large to handle C-130s, was constructed in 2007 and in 2011 it was announced that Marine Corps personnel would again be stationed on the island.  Currently, ships must anchor off the coral reef and cargo is transferred by raft or shallow-draft barge.  A government supply ship calls twice annually and merchant vessels deliver general goods about every three weeks.  There are generally 600 military and government personnel on the island at a time, but no civilians.  There is little vegetation on the island and few natural resources of any value.  Waters in the vicinity have been fished for years.  There are indications of possibly significant oil and gas deposits underlying the continental shelf, but no exploratory wells have been drilled.  The Republic of China recently announced plans to construct a $100 million port at the island.  The new port facility, when operational, would be able to service 3,000 ton naval frigates and Coast Guard cutters, as well as moderately-sized commercial vessels.  In addition, plans call for lengthening the runway so that larger aircraft can land and take off.

The Move to Blended Learning in Maritime Training