Posted to Maritime Musings (byDennis Bryant) on May 10, 2013 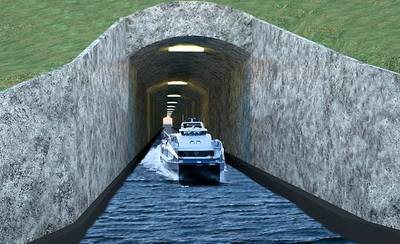 In a move reminiscent of the Athos Canal, built 483-480 BC at the direction of the Persian Emperor Xerxes, or the Corinth Canal, built in the 1890’s by the Greek Government, Norway has tentatively approved construction of a tunnel through the Stad/West Cape Peninsula to connect Moldefjorden and Kjødepollen.  Currently, ships transiting the central portion of the west coast of Norway are required to navigate around the exposed Stad/West Cape, which is notorious for heavy weather.  Officials report that the waters off the peninsula have seen 46 marine casualties and 33 deaths since World War II.  Directly connecting the two fjords would allow ships to avoid this hazard.  A direct connection was first proposed in 1874 and plans have been resurrected and modified on a regular basis since.  The new plans call for construction of a sea-level tunnel 23 meters wide, with an air draft of 33 meters, a depth of 12 meters, and a length of 1.7 kilometers.  This would allow passage of vessels up to the size of the currently operated ferries that ply the route between Bergen and Ålesund.  The tunnel project has been included in the National Transport Plan and one billion NKR ($175 million) have been set aside in the budget.  Construction is expected to take four years.  Construction of the Athos Canal took three years and allowed the Persian fleet to avoid the violent weather off the Athos Peninsula (although not the Athenian fleet, which defeated it in the Battle of Salamis).  The canal fell into disuse and has gradually been filled in.  The Corinth Canal, carved through solid rock, allows small ships (those with breadths of less than about 20 meters) to avoid the long transit around the Peloponnesian Peninsula.  If built, the Stad ship tunnel would be highly unique, although following in illustrious footsteps.