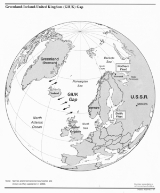 The Sound Surveillance System (SOSUS) is a US Navy program, initiated in the early 1950’s, to track Soviet or other potentially hostile submarines.  It consists of a series of hydrophones strategically placed on seamounts and continental slopes to detect noises (radiated acoustic power) emitted by these submarines.  If the noise is detected by two or more hydrophones, the location of the submarine can be detected with a reasonable degree of accuracy.  The first set of hydrophones was installed in the North Atlantic Ocean in the gap between Greenland, Iceland, and the United Kingdom – the GIUK gap.  Hydrophones have been placed in other parts of the oceans subsequently.  The fixed hydrophones have been supplemented by mobile assets, such as the Surveillance Towed Array Sensor System (SURTASS).  The existence of SOSUS was originally top secret, but was later publicly acknowledged by the Navy.  Scientists promptly sought access to this unique information source.  In 1990, the Navy granted approval to the National Oceanic and Atmospheric Administration (NOAA) to access the SOSUS arrays in the North Pacific Ocean to assess their value in marine environmental monitoring.  Under NOAA’s VENTS program, acoustic signals are monitored from its Pacific Marine Environmental Laboratory facility in Newport, Oregon.  The primary mission of the VENTS program is to remotely study submarine volcanism and hydrothermal vents.  Seismic monitoring is performed by checking tertiary waves (T-waves) generated by submarine earthquakes.  Due to temperature and density variations in ocean waters, T-waves propagate long distances through natural acoustic wave guides with minimal attenuation, making them excellent sources for remote sensing.  In 1993, NOAA installed a low-power acoustic beacon on a North Pacific seamount.  By reading signals from this known source, scientists are able to calibrate the other signals received.  In addition to monitoring seismic events, the SOSUS-VENTS program has proven capable to detecting vocalizations of large whales at long ranges.  Individual blue whales can sometimes be located in the open ocean based on their clicking sounds, emitted to communicate within or among pods.