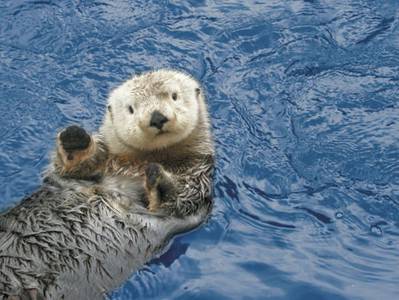 The sea otter (Enhydra lutris) is a member of the weasel family that ran away to sea.  It is the smallest of the marine mammals and the only one that does not rely on fat (blubber) for warmth.  Rather, it has the thickest coat of fur of any mammal – up to one million strands of hair per square inch.  The hairs are of two types: long waterproof guard hairs and short underfur.  The guard hairs keep the underfur dry.  The sea otter continually grooms itself.  Having a long and supple body, four legs, and a mouth, it is able to reach every piece of fur and remove food items, dirt, seaweed, and other foreign matter.  It rubs its fur to squeeze out water and then blows on the fur to introduce air.  Its rear paws are large, used primarily for swimming.  The fore paws are used primarily in foraging for food.  While the sea otter does come ashore occasionally, it walks like a drunken sailor.  Its natural home is the sea.  When at rest, the otter floats on its back, sculling gently with its hind paws and tail or gripping a piece of kelp to keep from floating away.  It eats more than 25% of its body weight each day to provide the calories needed to maintain its body temperature in cold water.  Sea otters prefer coastal waters with a depth of between 50 and 75 feet and a rocky bottom.  They eat mostly sea urchins, abalone, mussels, and snails.  To obtain one of its favorite foods – the abalone – a sea otter will obtain a stone.  Holding the stone in its forepaws, it pounds on the protective shell until the shell breaks and then scoops out the meat.  Stones are also used to break open other shell fish.  When its preferred foods are not available, the sea otter will catch fish with its forepaws and eat them.  Originally, sea otters lived in North Pacific coastal waters from northern Japan to Baja California.  Excessive hunting during the eighteenth and nineteenth centuries almost led to extinction.  Protective laws adopted in the early twentieth century have allowed stocks to rebound to almost two-thirds of historic levels.  Sea otters are now found off the coasts of eastern Russia, the Aleutian Islands, the Alaska mainland, British Columbia, Washington, and California.