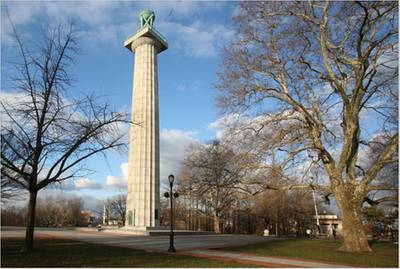 During the American Revolutionary War, British forces captured thousands of “rebels”.  Those in uniform were accorded treatment somewhat akin to prisoner of war status.  Those not in uniform, particularly the maritime privateers, were subjected to harsher conditions.  More than 18,000 American prisoners were held in captivity between 1776 and 1783 on old ships of the Royal Navy anchored in Wallabout Bay in New York harbor.  Wallabout Bay has been largely filled in over the years, becoming the site of the Brooklyn Navy Yard.  Over 11,000 of the American prisoners died in captivity.  Some corpses were buried in shallow graves, while many just thrown overboard.  Local women collected the remains when they became exposed or washed ashore.  Many more were discovered after the war as the area became developed.  A small vault was erected on the site in 1808 to hold the remains that had been preserved.  After some years of neglect, the remains were moved to Washington Park (since renamed Fort Greene Park) in Brooklyn, where a small monument was erected.  Following the discovery of additional remains in the Brooklyn Navy Yard, funds were raised from public and private sources for a larger crypt and memorial.  The architect Stanford White was commissioned to design the project.  Over a large crypt built on the highest elevation in Fort Greene Park was erected a 149-foot tall Doric column (the world’s tallest at the time) with an eight-ton bronze funeral urn at the top.  The column had an “eternal” flame at the top.  The flame went out in 1921 and was replaced in 1997 by a solar-powered beacon that comes on during hours of darkness.  There are a series of stone coffins in the crypt containing the remaining bones of the American prisoners.  President-elect William Howard Taft was the keynote speaker at the dedication ceremony for the new monument on 15 November 1908.  More than 20,000 persons attended.  Over the following century, the monument has suffered from neglect and lack of funding.  Recently, bills were introduced in Congress to study whether the monument should be incorporated into the National Park System.