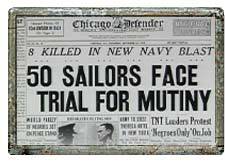 After the African-American sailors stationed at the Port Chicago Naval Magazine who had survived the explosion of 17 July 1944 had retrieved the remains of the 320 personnel who had died in the disaster and had cleaned up the worst of the debris, they were reassigned to the nearby Mare Island Naval Shipyard.  Unlike the white officers from Port Chicago, none of the African-Americans received “survivor’s leave”.  On 8 August 1944, the 328 African-American sailors at Mare Island were directed to load munitions on the awaiting munitions carrier USS Sangay (AE-10).  They said that they were afraid because the working conditions remained unsafe.  After Navy officers made it clear that loading munitions was their duty, seventy of the men changed their minds.  Still, on 9 August, a total of 258 African-American sailors in the battalion refused to load munitions.  They were marched under guard to a barge used as a temporary brig, which was designed to hold only 75 men at a time.  Civilian longshoremen were hired to load the munitions on the USS Sangay.  On 11 August, the men were assembled in a nearby field and addressed by the commanding officer, who said that the munitions were desperately needed by troops fighting on Saipan, that it was their duty to load the munitions, and that failure to do so would be considered mutiny.  The men were then told to divide into those willing to obey orders and those who were not so willing.  Forty-four men formed into the unwilling group.  The next day, they were joined by six additional men.  These 50 men, referred to as the Port Chicago 50, were identified by the Navy as mutineers.  All 258 men were interrogated about the matter and many of those not charged were convinced to sign statements which were later recanted.  The 208 men were then convicted at summary courts-martial of disobeying orders and sentenced to forfeiture of three month’s pay.  When the war ended, they received bad conduct discharges.  The Port Chicago 50 were charged with disobeying orders and with munity.  Trial was held at the Navy Base on Treasure Island in San Francisco Bay.  The press was invited to attend.  Thurgood Marshall, Chief Counsel of the National Association for the Advancement of Colored People (NAACP) was allowed to attend the latter portion of the court-martial, but was not allowed to participate.  The court allowed the prosecution to introduce hearsay as evidence of a conspiracy to commit mutiny.  Each of the accused testified that they were afraid to load munitions under the existing conditions and that they had never been directly ordered to load munitions.  Rather, they had been asked if they were willing to load munitions, to which they replied in the negative.  After deliberating for 80 minutes, the court found all guilty of mutiny.   They were reduced in rank to Seaman Apprentice and sentenced to 15 years hard labor and a dishonorable discharge.  The convening authority reduced the sentences for 40 of the 50 men.  Thurgood Marshall represented the Port Chicago 50 when the convictions were reviewed by the Judge Advocate General of the Navy.  The Secretary of the Navy ordered that the courts-martial be reconvened and that the court disregard the hearsay testimony.  The court reaffirmed the convictions and sentences and the convening authority reaffirmed his decision.  In September, 1945, with the war over, the sentences were each reduced by one year.  On 6 January 1946, the Navy paroled 47 of the 50 men to active duty aboard Navy vessels in the Pacific Theater.  Those who served their paroles on good conduct were eventually given general discharges under honorable conditions.  In 1946, the Navy commenced a process for complete integration of the service.  In 1990, an ultimately unsuccessful campaign was commenced by a group of 25 Congressmen for the reversal of the convictions of the Port Chicago 50.