When the sun just misses the Earth 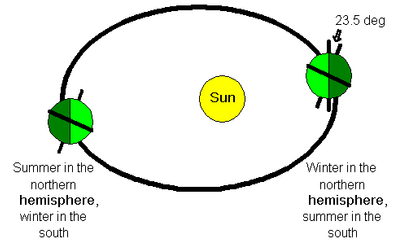 The whoosh you experienced at about 1900 UTC on Monday, January 3, 2011 was the sun passing by on its closest approach to the Earth – a mere 91,402,505 miles away.  This recurs every year, often at night when it can’t be observed.  The date and time of this celestial event vary slightly from year to year due to a combination of precession and global warming.  For those who cling to the old belief that the Earth orbits the sun, perihelion is the result of the Earth having an elliptical path rather than a circular path.  For those with an appreciation of history, this is the result of the Greeks having extra words for which they had to invent definitions.  Ancient Greeks had this word called “apsis” which they defined as the point of greatest or least distance of a body from one of the foci (another Greek word) of its elliptical orbit.  The closest point was called the periapsis and the furthest point was called the apoapsis.  If the two objects in question were the Earth and the sun, the closest point was called the perihelion and the furthest point was called the aphelion.  The ancient Greeks used all sorts of unique terms, mostly in an effort to confuse their enemies.  It worked with great success in the battles of Marathon (490 BC) and Salamis (480 BC).  The Romans were eventually able to crack the code and assume charge, not so much through military action as through one of history’s first hostile takeovers.  Because the Greeks had discovered the sun before the Romans, we continue to use the Greek terms.  Next year, on January 5, 2012, when you are experiencing the next perihelion, thank an ancient Greek.