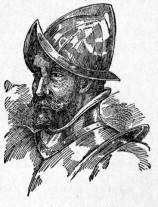 Panfilo de Narvaez was born in Valladolid, Spain in about 1470.   He was among the first Spanish settlers on the island of Jamaica.  In 1511, he joined the campaign of Diego Velásquez to pacify Cuba, commanding a company of archers.  At the successful conclusion of that campaign, he was rewarded with public office and land grants.  In 1520, he was dispatched to Mexico in command of a fleet of ships and 900 men to arrest and replace Hernán Cortez.  Instead, Cortez captured Narvaez and held him prisoner for a year while Cortez completed the conquest of the Aztec Empire.  Returning to Spain, Narvaez was commissioned by Charles V, the Holy Roman Emperor, to colonize Florida, only recently discovered by Ponce de Leon.  Departing Spain on 17 June 1527 with five ships and about 600 men, Narvaez sailed first to the Canary Islands and then to Hispaniola, where nearly 100 of his men deserted.  Arriving in Cuba, he hired a pilot who claimed detailed knowledge of the Gulf Coast.  On 14 April 1528, the four ships arrived at Boca Ciega Bay in present-day St. Petersburg (one ship had been lost in a storm).  The local Indians quickly fled.  An overland party located Tampa Bay, whereupon Narvaez ordered the pilot to take one ship and explore the much larger bay.  Neither the ship nor the pilot was ever seen again.  On 1 May, Narvaez split his forces, leading most of his soldiers on an overland expedition to discover supposed riches to the north, while the ships were to follow along the coast.  The ships quickly lost contact with Narvaez and eventually headed to Mexico.  As the expedition marched north, the Indians scattered.  In late June, 1528, the expedition, by now very low on food and supplies, attacked an Apalachee village, capturing several hostages and much corn.  The Apalachee engaged in a number of hit-and-run attacks, driving Narvaez and his remaining men to the coast, at present-day Apalachicola Bay.  There, they built five open boats and set off for Mexico.  Narvaez died at sea, along with most of the remaining soldiers.  In August 1528, the two remaining boats with 80 survivors washed up on the Texas coast near present-day Galveston.  They had no choice but to attempt to walk to Mexico.  They were quickly captured and enslaved by an Indian tribe.  The survivors, dwindling in number,  were traded from tribe to tribe as they were forced to march in a general southwest direction over the next eight years.  In July 1536, the four remaining survivors encountered a party of fellow Spaniards on a slave-taking expedition in Culiacán near the central portion of the west coast of Mexico.  It took them a while to convince the Spaniards of their identity.  The survivors were taken first to Mexico City and then on to Spain.  Álvar Núñez Cabeza de Vaca, the second in command of the Narvaez expedition and the senior survivor, wrote a narrative of the failed eight-year expedition, which became a best-seller.

Harmonizing Shipping Regulations: not so fast