The first US law to regulate small powered vessels 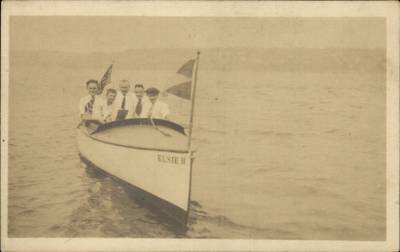 The Motorboat Act was adopted into law on June 9, 1910.  It established for the first time requirements for vessels propelled by machinery that were not more than 65 feet in length.  Vessels propelled by steam had been regulated for many years.  It was only following the invention of the small internal combustion engine that it became practical to use anything other than steam to power small vessels.  Motorboats made their debut at the St. Louis World’s Fair in 1904 and the market expanded rapidly.  As an aside, it was this invention that allowed the powering of Wright Brother’s Flyer in 1903, as the engine was relatively light and powerful for its time.  As motorboats became something other than a novelty, it became necessary to ensure that they were safe, both for the persons on board and for other vessels on the waterways.  Tug boats and tow boats of 65 feet and less propelled by steam were already regulated and so were exempted from these new provisions.  All other motorboats became subject to inspection by inspectors of the Bureau of Steamboat Inspection.  Motorboats were divided into three classes, based on length.  Motorboats operated between sunset and sunrise were required to exhibit lights similar to those of steam vessels.  The motorboats were required to have a whistle or other sound-producing mechanical device.  Larger motorboats were required to carry an efficient fog horn and an efficient bell.  Every motorboat was also required to carry life preservers or similar devices sufficient to sustain afloat every person on board.  Those devices were to be so placed as to be readily accessible.  Motorboats carrying passengers for hire could not be operated or navigated except in the charge of a person duly licensed for such service by the local board of inspectors.  The license of a motorboat operator could be revoked for misconduct, gross negligence, recklessness in navigation, intemperance, or violation of law on the part of the holder.  Every motorboat was required to carry ready for immediate use the means of promptly and effectively extinguishing burning gasoline.  A fine not exceeding $100 could be imposed for violation of the Motorboat Act and the motorboat was liable for the penalty and could be seized and sold for payment if necessary.  The Secretary of Commerce and Labor was authorized to implement regulations to secure proper execution of the Act.  The provisions of the 1910 Act are still reflected in current laws and regulations applicable to small vessels in US waters.