Manifestations of our iron-cored planet 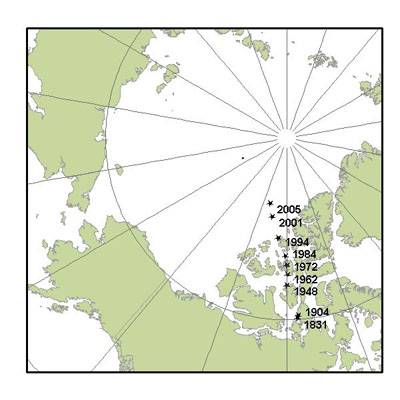 The magnetic poles are the two points on the surface of the Earth at which the magnetic field points vertically down or up (in the northern and southern hemispheres respectively).  These points are located near, but not at the northern and southern geographic poles.  The geographic poles are located at the axis of rotation and are relatively fixed in position.  The magnetic poles, though, are continually moving.  The molten iron core of the Earth acts as a giant magnet and the Earth’s rotation serves to create the planet’s magnetic field.  The molten core, though, is in motion and it is this motion that is largely responsible for the drift of the magnetic poles.  The North Magnetic Pole, then at Cape Adelaide on the Boothia Peninsula of Canada, was first reached by James Clark Ross in 1831.  It has moved to the northwest since that time and is now estimated to be located in the Arctic Ocean approximately 250 miles northwest of Ellesmere Island, proceeding in the direction of Siberia.  During most of the twentieth century, the speed of its movement was estimated to be about five miles per year.  Lately though the estimated speed has increased to more than 25 miles per year.  The South Magnetic Pole, then in Adélie Land, Antarctica, was first reached by Douglas Mawson in 1909.  It has since moved to the north-northwest at about eight miles per year and is now estimated to be located off the Antarctic coast between Adélie Land and Wilkes Land.  Due to variations in the shape of the Earth and its molten core, the north and south magnetic poles are not antipodal (opposite one another on the surface of the Earth).  In recent years, the strength of the planet’s magnetic field has weakened.  This weakening will reduce the field’s protective effect and make the Earth somewhat more susceptible to solar storm impact.  It may also signify that a geomagnetic reversal is slowly approaching.  Geomagnetic reversals, where the polarity of the north and south magnetic poles switch, has occurred on many occasions over the history of the Earth, but the reversal process takes several thousand years and happens on a cycle of approximately 100,000 years, so don’t throw away your magnetic compasses.