The tree that saved a nation 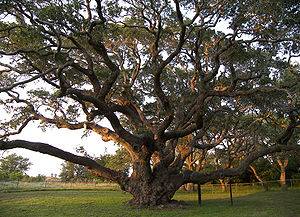 Live oak is a term used to refer to oak trees that are evergreen (retain leaves year-round, thus “alive”).  There are a number of evergreen oak species and many are found in the southeastern United States (North Carolina to Texas).   A mature live oak tree is massive, but relatively short, tending to have almost horizontal, twisting branches.  It is also one of the densest hardwoods found in North America, with a specific gravity averaging 0.88.  This twisting nature prevents is use as regular lumber, but, together with its high density, made it extremely prized during the heyday of wooden shipbuilding in America.  Wood from the live oak is ideal for the curved structural members of the hull of a wooden ship, such as knee braces.  If the wood is cut expertly, the lines of the grain would fall perpendicularly to the lines of stress, creating structures of exceptional strength for their size.  Thus, live oak trees were highly valuable until iron and steel ship construction came into vogue.  Live oak was used in the construction of the USS Constitution (“Old Ironsides”).  This wood was so valued that it was frequently reused.  When an old ship was broken (i.e., recycled), the knee braces were often removed and then fitted into new ships.  From the mid-1700s through the mid-1800s, live oak rustling was a serious problem.  Congress enacted statutes in 1817, 1822, and 1831 protecting live oak trees on federal lands, authorizing use of the land and naval forces to prevent the unauthorized felling of live oak trees, and prescribing punishment for such unauthorized felling.  The only authorized use of wood from live oaks obtained from federal land was for construction of ships of the Navy of the United States.  Punishment was a fine of not less than three times the value of the trees cut and imprisonment for a period not exceeding twelve months.  These Acts of Congress relating to the live oak tree were some of the first “environmental protection” statutes in US history.  Their original justification, though, was national defense.