The Pacific’s counterpart to the Gulf Stream 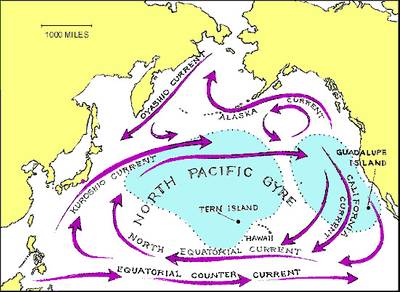 The Kuroshio Current (also known as the Black Tide or the Japanese Current) is the north-flowing portion of the North Pacific Ocean gyre.  It is the Pacific Ocean equivalent of the Atlantic’s Gulf Stream.  As the Gulf Stream moderates the weather of Iceland, the British Isles, and northern Europe, the Kuroshio Current moderates the climate of Japan, the Aleutians, and coastal Alaska and British Columbia by bringing warm tropical water from the equatorial region toward the polar region.  The Kuroshio Current is considered to have its beginning off the east coast of Taiwan, where the North Equatorial Current changes from flowing west to flowing more toward the north.  The Kuroshio Current carries copepods, squid, and other marine life north.  Its warm waters sustain coral reefs off the east coast of Japan, some of most northerly coral reefs in the world.  Like the Gulf Stream, the 60-mile wide current produces numerous eddies.  Some eddies have a diameter of 40 miles and extend down to a depth of 300 feet.  Temperature differences can cause upwellings of nutrients, generating phytoplankton blooms.  The phytoplankton is consumed by zooplankton, which are consumed by small fish, which are consumed by larger fish.  Everything is recycled!  As with the North Atlantic, the western North Pacific has a number of counter-currents and smaller branch currents all related by complex mechanisms to the Kuroshio Current.  The Tsushima Current flows north parallel to the Kuroshio Current, but on the west side of Japan.  The Liman Current flows south from the Sea of Okhotsk and along the coasts of Russian and the Korean Peninsula, not unlike the Labrador Current off the east coast of Canada and New England.  At its southern beginning, the Kuroshio Current has a temperature of up to 25°C.  By the time it turns east off the Aleutian Islands, the water temperature has dropped to as low as 2°C.  The overall transference of heat from the tropics to northern regions is massive.