The raft that crossed the South Pacific in 1947 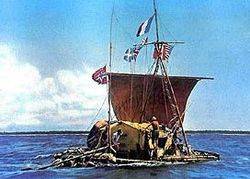 Kon-Tiki was the name given by Norwegian adventurer Thor Heyerdahl to a balsa raft that he and his party built in Peru in 1947 and sailed to Polynesia.  At the time, there was a dispute about were the Polynesians had originated.  Most experts believed that they had arrived from Asia centuries before, but a small group (including Heyerdahl) believed they had sailed across the Pacific from South America.  With no DNA analysis available at the time, neither theory could be conclusively proven or disproven.  The major argument against the South American theory was that few believed that the vast distance between South America and the Polynesian Islands could have been crossed by persons with primitive technology.  Heyerdahl set out to show that it could be done.  Researching the available materials and technology of pre-Columbian America, as well as the limited historical record, he determined that a substantial raft could have been built of indigenous balsa wood.  The raft, when finished, was approximately 45 feet long and 18 feet wide.  The 29-foot tall A-frame mast carried a 15x18 foot main sail.  A low cabin of plaited bamboo, situated behind the main mast, provided rudimentary shelter.  Heyerdahl and his five crew members departed Callao, Peru on April 28, 1947.  The raft was slowly towed fifty miles at to sea by a Peruvian Navy tug, but was otherwise unassisted in its epic voyage.  With an average speed of 1.5 knots, the expedition sighted the Puka-Puka atoll in Polynesia on July 30.  An attempt to land on Angatau Island on August 4 was unsuccessful.  On August 7, 1947, the Kon-Tiki grounded off Raroia Island in the Tuamotu group of Polynesia, having traveled approximately 4,340 mile in 101 days.  Several days later, they were rescued by natives from a nearby island.  Eventually, Heyerdahl and his crew, with the Kon-Tiki in tow, were taken to Tahiti by a French schooner.  News of the exploit excited the world, still weary from the devastation of World War II.  Heyerdahl wrote a bet-selling book (which I and many of my classmates read in school a few years later).  A documentary film about the voyage won an Academy Award in 1951.  Heyerdahl went on to a distinguished career and further adventures.  The Kon-Tiki is now on display in a museum in Oslo.  DNA evidence later largely disproved the theory of South American colonization of Polynesia, but takes nothing away from the epic 1947 adventure.