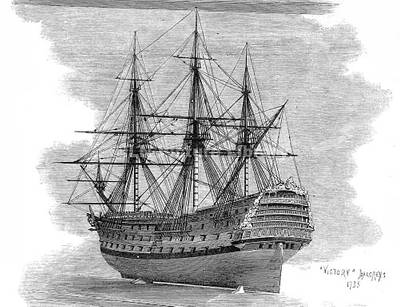 HMS Victory was a 100-gun first rate ship of the line of the Royal Navy.  Launched in 1737, it was one of six vessels to bear the name.  The one built in 1765 that served as the flagship of Admiral Horatio Nelson at the Battle of Trafalgar is the most famous of this group.  In its day, though, the 1737 version of the Victory was the most powerful warship in the Royal Navy.  It was also the last one armed solely with bronze cannon.  Technically, the 1737 version was a rebuild of the 1675 version, as some timbers from the older ship had been preserved and were utilized in the newer ship.  This was all part of long-running fiction employed by the Royal Navy to keep from having to petition Parliament for new ships.  Instead, it merely sought funds for the rebuild of old ships, a practice that today might be called a mid-life extension.  The difference was that the 1675 version had burned to the waterline in 1721 (but had never been officially decommissioned).  In 1744, while serving as the flagship of Admiral Sir John Balchen, the Victory led a fleet of warships to relieve a number of Royal Navy supply ships that had been blockaded in the Tagus estuary of Portugal by a French fleet.  Returning to Britain, the fleet was overtaken in the Western Approaches to the English Channel by a fierce storm.  The Victory, which had a reputation as “high-sided vessel” (making her more susceptible than most to winds on the quarter or on the beam), was separated from the fleet.  It sank with the loss of all 1,150 men on board, including Admiral Balchen, on October 4, 1744.  Odyssey Marine Exploration, of Tampa, Florida, discovered the wreck of the Victory in May, 2008 and recovered two of its bronze cannons.  The wreck is located in international waters between Great Britain and France.  Plans approved by the British Government call for Odyssey Marine to recover the vessel and transfer it to the Maritime Heritage Foundation.