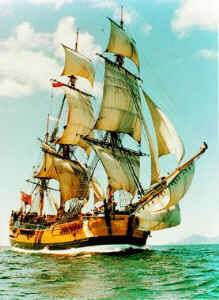 The bark HMS Endeavour was built in 1764 as the collier Earl of Pembroke.  A type known locally as a Whitby Cat, it had a broad, flat bow, a square stern, a long box-like body with a deep hold, and a flat bottom.  Originally ship-rigged, it was converted to a bark-rig when acquired by the Royal Navy in 1768 for a scientific voyage to the South Pacific.  The original purpose of the voyage was to observe the transit of Venus across the face of the sun on 3 June 1769.  Venus transits are historically of great scientific importance as they were used to gain the first realistic estimates of the size of the solar system.  Utilizing the principle of parallax, multiple observations of the 1639, 1761, and 1769 transits provided astronomers with the first realistic calculation of the astronomical unit, the distance from the earth to the sun.   Even before Endeavour departed Plymouth on 26 August 1768, its mission was expanded to include exploration and charting of the South Pacific and a search for the unknown landmass Terra Australis Incognita.  The junior naval officer James Cook was selected to command the expedition based on his background in mathematics and cartography and he was promoted to Lieutenant.  After observing and recording the transit of Venus, near the site in Tahiti still called Venus Point, Endeavor departed for the Society Islands, which Cook charted and claimed for Britain.  The islands, though, are now administered by France as part of French Polynesia.  In October, Endeavor reached New Zealand.  Cook spent the next six months charting the two main islands, which he again claimed for Britain (this time with greater long-term success).  In April 1770, Endeavor reached the east coast of Australia, which Cook again claimed for Britain, when he landed in Botany Bay, New South Wales.  During the extended exploration and charting of the east coast of Australia, Endeavour grounded hard on what is now called Endeavour Reef in the Great Barrier Reef.  Much of what could be spared, including ballast and most of the ship’s guns, were jettisoned to lighten ship and it eventually floated free on a high tide.  In a process called fothering, an old sail impregnated with oakum and wool, was drawn under the hull to where it had been holed.  The sail partially blocked the hole, decreasing the flow of water into the ship.  Endeavour was careened for temporary repairs.  Permanent repairs were effected in Batavia, the capital of the Dutch East Indies.  Endeavour returned to Britain, via Cape Town, on 12 July 1771 to great acclaim.  The ship was sold in 1775 and renamed Lord Sandwich.  Requisitioned by the Royal Navy to assist in quelling the growing unrest in North America, in February 1776, it embarked a contingent of Hessian mercenaries for New York and Rhode Island.  Lord Sandwich was then used in Narragansett Bay as a prison ship for captured rebels.  When a French fleet threatened the bay in 1778 to support the rebel forces, thirteen British vessels, including Lord Sandwich, were scuttled to block the fleet’s entry.  Lost cannons were recovered off Endeavour Reef in 1969.  Timber frames from a sunken hull, believed to be that of the Endeavour/Lord Sandwich have been recovered earlier this year in Narragansett Bay.  A replica vessel was built in Australia, retraced much of the original ship’s voyage, and is now a museum ship in Sydney Harbour.