The United States Navy steps onto the world stage. 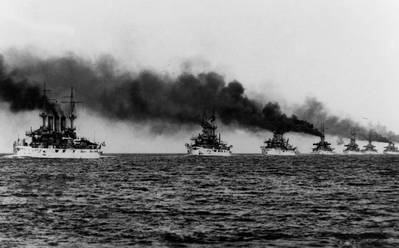 Starting in about 1890, the United States Navy began a rebuilding program to replace its antiquated fleet, most of which then dated from the Civil War.  It handily won the naval conflicts of the Spanish-American War, but that was against a nation with an even more antiquated fleet.  By 1907, the US Navy had become relatively formidable, certainly when compared to where it was only ten years previously.  In that year, President Theodore Roosevelt, who had served as Assistant Secretary of the Navy in 1897-98, directed the Navy to send a sizable fleet on a mission to circumnavigate the earth and demonstrate America’s growing military power.  The Navy dispatched sixteen of its battleships and a handful of escort vessels.  The ships were painted white, the Navy’s peacetime color scheme in that era.  They also bore gilded scrollwork and red, white, and blue banners on their bows.  Unofficially, everyone referred to the grouping as the Great White Fleet.  The ships and their 14,000 crew members departed Hampton Roads, Virginia on December 16, 1907.  They were divided into two squadrons of eight battleships each.  The first leg of the voyage took them to Trinidad, Brazil, Chile, Peru, and Mexico before arriving in San Francisco.  The second leg was a relatively brief trip to Puget Sound and back.  The third leg took them across the Pacific, with stops in Hawaii, New Zealand, Australia (three ports), the Philippines, Japan, China, and back to the Philippines.  The fourth and final leg was almost a dash.  They stopped in Ceylon (now Sri Lanka) and Egypt.  Learning of a major earthquake in Sicily, the fleet made an unscheduled stop there to deliver relief supplies and assist in some reconstruction.  Then, it was on to Gibraltar and across the Atlantic to home.  The fleet arrived in Hampton Roads on February 22, 1909, having sailed 43,000 nautical miles and making twenty port calls.  They were met by Theodore Roosevelt, who was in the last month of his Presidency.  Standing on a gun turret of the battleship USS Connecticut (the flagship for the voyage), Roosevelt advised the sailors: “Other nations may do what you have done, but they’ll have to follow you.”  The voyage was a great success, both domestically and internationally.  It garnered significant interest in the Navy nationwide.  More importantly, it made clear to the world that the United States was no longer a quiet and isolated country that could be ignored.

MLC set to brighten up the seafaring career