Posted to Maritime Musings (byDennis Bryant) on May 3, 2011

A drillship with an illustrious backstory 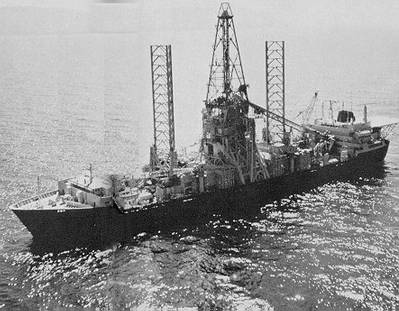 The Soviet nuclear submarine K-129 sank in the central Pacific in 1968.  The Soviet Navy mounted a search, but was unable to locate the wreck.  The US Navy, which has an extensive subsea monitoring system, knew where it was.  The Central Intelligence Agency (CIA) decided to attempt to recover the wreck, knowing that it contained secret code books and advanced weapons.  Needing a cover story for the recovery effort, the CIA approached Howard Hughes, who was both rich and eccentric.  Hughes served as the front man for the building of the Glomar Explorer.  The stated purpose of the unusual vessel was the extraction of the recently-discovered manganese nodules from the sea floor.  The Glomar Explorer got underway in 1974 on the top secret Project Azorian.  It succeeded in recovering a portion of the Soviet submarine, along with some cryptographic machines, several torpedoes, and the bodies of six Soviet sailors.  The sailors were reburied at sea with military honors.  Some of the crewmembers of the Glomar Explorer later disclosed the nature of the voyage, but many details were not revealed until 2010.  The ship was mothballed after its first voyage.  A private company leased the ship in an attempt to do some actual deepsea mining, but the excessive costs doomed the project.  In 1997, the ship was leased to Global Marine Drilling.  That company, which later merged with Santa Fe International, converted the Glomar Explorer into a dynamically-positioned drillship.  The ship’s name has been changed to GSF Explorer.  It is capable of drilling for oil and gas in waters up to 10,000 feet deep.  While ownership of the vessel was previously vested in the US Maritime Administration, the GSF Explorer was recently sold to Transocean.