A master mariner and pioneering aviator 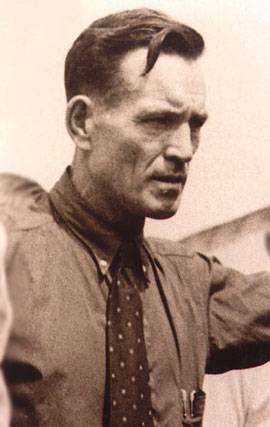 Frederick Joseph Noonan (1893-1937) was a mariner prior to becoming an aviator.  At age 17, he shipped out as an ordinary seaman (OS) on a British sailing bark.  Over the next few years, he qualified as a quartermaster and as a boatswain’s mate.  During World War I, he served as a deck officer in the US Merchant Marine and was on three ships sunk by German U-boats.  Remaining in the merchant marine after the war, he eventually qualified as a master.  He took flying lessons in the late 1920’s and earned a limited commercial pilot’s license in 1930.  He then switched careers and took a job with Pan American World Airways as a navigation instructor.  In March 1935, Noonan was the navigator on the first Pan American Sikorsky S-42 flying boat at San Francisco Bay and the next month navigated the first round-trip China Clipper flight between San Francisco and Honolulu.  Subsequently, he mapped the China Clipper routes across the Pacific, including Midway Island, Wake Island, Guam, Manila, Macao, and Hong Kong.  He was legendary for always bringing along his ship’s sextant.  In early 1937, Noonan resigned from Pan American to open an aviation navigation school in Los Angeles.  Before he could get started on his new venture, he was hired by Amelia Earhart to serve as her navigator on a planned venture to circumnavigate the globe by air at the equatorial latitudes.  The first aerial circumnavigation had been completed by the US Army Air Service in 1924, but that route had been exclusively in the Northern Hemisphere and portions had been through Alaska, the Soviet Union, northern Japan, and Korea.  She selected Noonan due to his vast experience in both maritime and aeronautical navigation.  Together, they laid out the final version of the circumnavigation route.  The longest (2,500 miles) and most dangerous leg of the route was from Lae, New Guinea to Howland Island, a US possession in the central Pacific southwest of Hawaii.  The island was very small and had no navigational aids.  The US Coast Guard Cutter Itasca was stationed just offshore to guide the aircraft to its landing site.  On the morning of 2 July 1937, the Itasca received several radio calls from the Earhart-Noonan aircraft, reporting that they could not locate Howland Island and were running low on fuel.  There is no evidence that the aircraft received any of the radio calls from the Itasca.  The aircraft was never located, despite an extensive air-sea search.