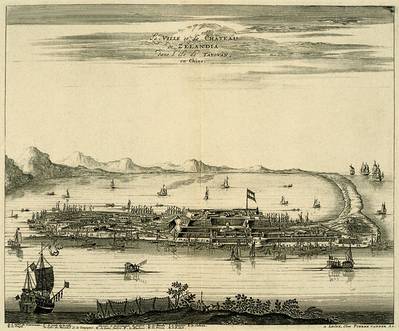 Once the Dutch decided to compete with the Portuguese and the Spanish for maritime commerce with East Asia, they jumped in with both feet.  After establishing a base in Batavia (modern-day Jakarta), they focused on trade with China and Japan.  Failing in attempts to negotiate trading rights in China, in 1622 the Dutch built a small trading factory on the Pescadores Islands (now referred to as the Penghu Islands) off the west coast of Formosa.  When that proved unsatisfactory, the trading factory was moved to the southwest coast of Formosa in 1624 at what is now called Anping, Taiwan.  Construction lasted for ten years and included a substantial fortress called Fort Zeelandia.  The trading factory at the fort developed a triangular trading pattern between Formosa, Japan, and China that proved highly lucrative.  Eventually, Fort Zeelandia was the second most profitable trading base of the Dutch Verenigde Oostindische Compagnie (Dutch East India Company or VOC) system.  Hides of the Formosan Sika Deer were highly prized by the Japanese, who used them to make samurai armor.  Other parts of the deer were sold to the Chinese.  The Dutch encouraged ethnic Chinese to immigrate to Formosa, where they were convinced to grow sugar cane and rice.  These products were then sold in Japan and China at premium prices.  Eventually, the Dutch controlled almost the entire coast of Formosa, but never the interior.  In 1661, a Chinese fleet of 400 warships and carrying 25,000 troops attacked Formosa.  They quickly subdued the island, except to Fort Zeelandia.  After a nine-month siege of the fort, during which time the Dutch lost 1,600 of its 2,000 defenders, the Dutch commander signed articles of surrender on 1 February 1662.  The Dutch were allowed to depart with their personal belongings and supplies, leaving behind all goods and VOC property.  Thus ended the Dutch trading in the area.

Talking With the Experts About Maritime Safety Culture - What is it And How to Improve It?