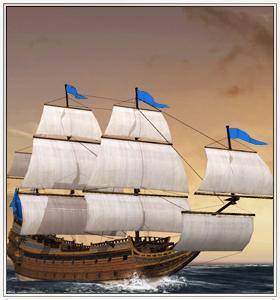 The fluyt or fluitschip was one of the first ocean-going ships built exclusively for commerce.  Previously, ships tended to be built to perform the dual role of fighting battles and carrying cargo.  Thus, their construction was fairly robust and they carried cannons, ammunition, and combat personnel.  The Dutch did away with that.  The fluyt was lightly constructed.  It carried only sufficient armament to fend off pirates and the entire crew was working sailors.  To maximize cargo capacity while minimizing crew size, the main deck was relatively small, but the hull bulged out on the sides, creating a “fat-bottomed” or pear-shaped cross-section.  This design also had the advantage of reducing ship tolls, particularly through the Øresund, where the Danish toll was based on the dimensions of the main deck.  The fluyt carried three stubby masts, with the fore and main square-rigged and the mizzen lateen-rigged.  While not speedy, these vessels were inexpensive both to build and to operate.  Typically about 80 feet in length, they operated with a crew of about 35 men.  They could carry twice the cargo of their counterparts at half the cost.  First built in 1595, they soon allowed the Dutch to dominate international maritime trade, first to the Baltic and then to India and the Far East.  The fluyt was the favored vessel of the Dutch East India Company, which dominated the Far East trade for almost a century.  It took the British a surprisingly long time to adopt and modify the design, which they referred to as an East Indiaman vessel.