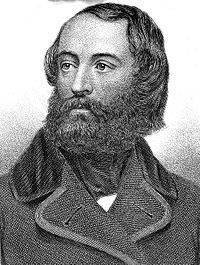 Elisha Kent Kane (1820-1857) was born in Philadelphia and graduated from the University of Pennsylvania Medical School in 1842.  Joining the United States Navy as a medical officer, he served in the China Commercial Treaty mission of 1844, in the Africa Squadron, and with the Marine Corps during the Mexican-American War.  He was appointed senior medical officer of the 1850-51 Grinnell Arctic Expedition searching for the lost expedition of Sir John Franklin.  They found Franklin’s first winter camp on Beechey Island, but could trace the Franklin Expedition no further.  Kane organized and headed the Second Grinnell Expedition on the brig Advance, which departed New York on 31 May 1853.  Sailing north from Baffin Bay, he discovered the body of water that he called Peabody Bay and that was eventually named in his honor – the Kane Basin, lying between Greenland and Ellesmere Island.  The expedition wintered-over in Rensselaer Bay near the southern end of Kane Basin.  In the summer of 1854, they continued north, charting the coast and discovering Kennedy Channel, leading to the Arctic Ocean.  Having ventured further north than any previous expedition of the western Arctic, they started their return.  They wintered-over for a second time in Kane Basin.  On 20 May 1855, they abandoned their ice-bound ship and retreated south, losing only one expedition member, but ruining Kane’s health.  He returned to New York on 11 October 1855.  His two-volume “Arctic Explorations” was a best-seller with a public enamored with the high north.  He visited England in 1856 to fulfill a promise to report personally to Lady Franklin on efforts to locate her husband’s expedition.  Due to Kane’s failing health, his doctor advised him to travel to Havana, Cuba.  He died there on 16 February 1857.  His body was taken by ship to New Orleans and then by train to Philadelphia.  The train was met at every station along the way by a delegation of mourners.  During his short life, Elisha Kane had been awarded medals by the United States Congress, the Royal Geographical Society, and the French Société de Géographie.  The destroyer USS Kane (DD-235) and the oceanographic research ship USNS Kane (T-AGS-27) were named in his honor.