A large, ocean-going seal, the male having a large proboscis 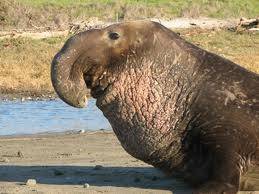 Elephant seals are large seals represented by two species, the northern elephant seal and the southern elephant seal.  Both were hunted to near extinction through the end of the nineteenth century.  The smaller northern elephant seal is found in the eastern portion of the North Pacific Ocean, coming ashore along the Pacific coast of Canada, the United States, and Mexico.  The most northerly breeding location is Race Rocks on Vancouver Island in the Strait of Juan de Fuca.  The southern elephant sea is found in waters throughout the Southern Ocean, coming ashore in the South Georgia Islands, Macquarie Island, and the coasts of Argentina, South Africa, and New Zealand.  The ocean-going animal takes its name from the large proboscis of the bull (adult male).  The proboscis is used to produce very loud roaring noises, primarily during mating season.  It also acts as a rebreather, conserving moisture being exhaled from the lungs.  This is important as the bulls do not leave the beach during mating season.  The northern elephant sea male reaches a length of about 15 feet and a weight of about 5,000 pounds, while the larger southern elephant male reaches a length of about 17 feet and a weight of about 6,600 pounds.  Cows generally reach a length of about 10 feet and a weight of about 2,000 pounds.  The male elephant seal has a life expectancy of about 14 years, while the female may live to age 22.  Elephant seals spend about 80% of their lives at sea and can hold their breath for about 100 minutes – the longest of any non-cetacean mammal.  They typically dive to a depth of almost 2,000 feet in search of food.  Their primary diet consists of skates, rays, squid, octopus, eel, small sharks, and large fish.  They have a thick layer of blubber and a thin layer of hair, which molts during their annual haul outs.  Elephant seal milk is extremely high in milkfat – as much as 50%, compared with 3.5% for dairy cow milk and 4% for human milk.  The elephant seal is listed internationally as of least concern with regard to conservation, despite being subject to entanglement in marine debris, fishery interactions, and boat collisions.  In the United States, it is covered by the Marine Mammal Protection Act.