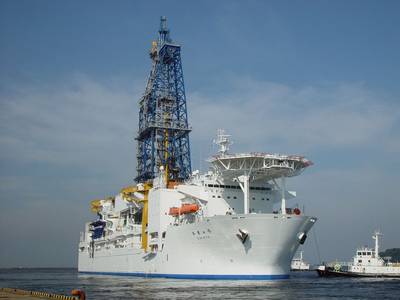 The Japanese deep sea drilling vessel Chikyu is the first riser-equipped drilling vessel in the world designed and built for scientific work.  It is capable of drilling in waters of up to 2,500 meters (8,125 feet) in depth.  Its primary mission is to drill through the 7,000 meters (23,000 feet) thick seabed, reaching for the first time the Earth’s mantle.  The Earth’s crust varies in thickness, but tends to be thinnest under the deep seabed.  Drilling ashore is technologically easier, but the crust’s thickness on land makes the task more difficult in a practical sense.  In 1989, the Kola Superdeep Borehole in Russia reached a depth of 12,262 meters (40,230 feet), but this was only one-third of the thickness of the crust at that location.  The ocean drilling program is intended to increase the scientific understanding of Earth history, climate change, plate tectonics, natural resources, and geohazards.  The Japanese Government is particularly interested in learning more regarding plate tectonics and geohazards in areas of the North Pacific Ocean off the east coast of Japan, due to its vulnerability to earthquakes and tsunamis.  The Chikyu was launched in 2002 and commenced its scientific work in 2005.  It is 210 meters in length, with a beam of 38 meters and a gross tonnage of 57,000 tons.  The drilling riser (derrick) has a height of 121 meters above the waterline.  The ship carries a crew of 100, along with up to 50 research personnel.   The Chikyu was damaged as a result of the 2011 earthquake and tsunami.  At the time, it was moored just off the northeast coast of Honshu Island, Japan.  The tsunami pushed the vessel into a pier, holing the ship and damaging one of its stabilizers.  It has since been repaired and returned to service.  The Chikyu is continuing its efforts to drill into the active seismogenic zone and recover samples of the Earth’s mantle.

Tags: of women marine merchant seamen and during families II in women. WW

Shippers will be squeezed by Cape Town deviance