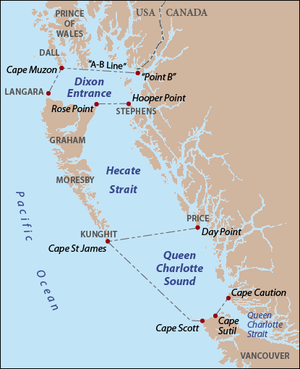 Prior to 1867, Russia claimed Alaska.  Both Alaska and British North America were sparsely settled and not well charted.  The boundary between the two entities was only roughly defined.  With Seward’s Folly, the United States acquired Russia’s claim to Alaska.  Little changed until gold was discovered in the Klondike in 1896.  Thousands of miners sought access across the disputed lands and waterways.  It soon became imperative that the two sovereigns (United States and Great Britain) agree on the boundary.  Far and away, the major bone of contention was the land boundary.  A secondary concern was jurisdiction over the Portland Channel, which provided convenient access to the interior.  The other maritime boundaries were considered of minor consequence.  In January 1903, US Secretary of State John Hay and British Ambassador Michael Herbert agreed on a process to resolve the dispute.  The agreement, formally ratified as the Hay-Herbert Treaty, established a tribunal to delimit the boundary within agreed parameters.  In October 1903, the tribunal ruled largely in favor of the United States with regard to the land boundary.  The Portland Channel was divided, giving both sovereigns access.  The maritime boundaries in the Arctic Ocean and the Gulf of Alaska were not defined in writing, which only made reference to an accompanying map.  The line in Arctic Ocean merely extended the land boundary to the north.  The line in the waters of and contiguous to the Gulf of Alaska ran roughly west from the southern end of the Portland Channel out into the Pacific Ocean.  There was no indication that either line was a definitive and considered delimitation of the maritime boundaries.  At the time, no one noticed and no questions were raised.  Over time, though, the United States Government and the people of Alaska became concerned.  The east-west line from the Portland Channel ran through the Dixon Entrance and just offshore of Dall Island, the southern-most island of southeast Alaska.  The United States contends that the line through Dixon Entrance as shown on the map accompanying the tribunal’s decision was merely an indication of which islands belong to either nation and was not intended to delimit the maritime boundary.  Canada, which acquired the matter upon independence, contends that the line (generally called the A-B Line) defines the international maritime boundary.  Neither side has pursued the dispute any further.  The US Coast Guard and the Canadian Coast Guard patrol the Dixon Entrance, rescuing whoever needs assistance and trying to mediate disputes between local fishermen.  Things may get more heated as the Port of Prince Rupert grows.