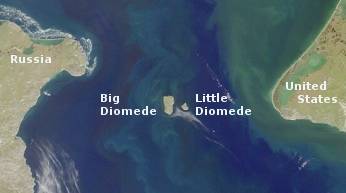 The Diomedes are two tuya-type islands located in the Bering Strait between Alaska and Siberia.  A tuya-type island is a distinctive flat-topped island with steep sides.  It is formed when lava from an erupting volcano comes to the surface through a thick glacier or ice sheet.  The lava cools quickly and piles up, somewhat resembling a mesa.  Big Diomede (about ten square miles) is on the Russian side of the International Date Line and the boundary between Russia and the United States.  Little Diomede (about two square miles) is on the US side.  They are separated by just over two miles of water.  In ancient times, a land bridge joined what is now Siberia and Alaska, allowing, among other things, humans to migrate east and horses to migrate west.  Vitus Bering, leading a Russian expedition, landed in the Diomedes on 16 August 1728, St. Diomedes Day in the Russian Orthodox Church.  When the United States purchased Alaska in 1867 (so-called Seward’s Folly), the treaty established that the boundary line would run equidistantly between the two islands and head “northward infinitely until it disappears completely in the Arctic Ocean.”  During World War II, Soviet forces removed the native population from Big Diomede and established a small military base and observation post.  Little Diomede has a population of about 150 native Alaskans who live a subsistence lifestyle, harvesting fish and crab, hunting beluga whales, walrus, seals, and the occasional polar bear.  They also harvest the eggs of sea birds that nest on nearby Fairway Rock.  All the adult males on Little Diomede belong to the National Guard.  The National Guard Armory is the largest structure on Little Diomede and the natives refer to it proudly as America’s first line of defense.  There is no evidence that Sarah Palin has ever visited Little Diomede.  Mail is delivered weekly, weather permitting, by helicopter.  Supplies are delivered intermittently by barge.

5 Types of Container Weighing Systems for Ports and Terminals

Where Do Ports Fit in California's Environmental Regulatory Vision?