An ordinary motor lifeboat that performed an extraordinary rescue 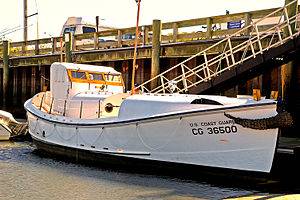 The US Coast Guard motor lifeboat 36500 is the only one of the many hundreds that were built between the 1930s and the 1950s to be placed on the National Register of Historic Places.  On 18 February 1952, during a severe winter storm off Cape Cod, two T-2 tankers, the SS Fort Mercer and the SS Pendleton, suffered separate massive material failures and both broke in half.  The Coast Guard learned of the SS Fort Mercer casualty and dispatched several vessels to the scene.  Several hours later, the two halves of the hull of the SS Pendleton were observed.  The CG 36500 was dispatched with a crew of four volunteers: BM1 Bernard “Bernie” Webber, ENG3 Andrew “Andy” Fitzgerald, SN Irving “Ervin” Maske, and SN Richard Livesey.  The survivors of the SS Fort Mercer were rescued and brought ashore in trying conditions.  The bow section of the SS Pendleton, with the master and seven crewmembers, eventually sank with no survivors.  The stern section, with 33 crewmembers, remained afloat.  BM1 Webber maneuvered the CG 36500 alongside and was able to take 32 of the crewmembers on board, despite the horrendous seas and the fact that the motor lifeboat was rated for a maximum of twelve persons.  One crewmember drowned during the rescue operation.  The stern section of the SS Pendleton sank minutes after the 32nd crewmember got off.  BM1 Webber returned slowly and carefully to the Chatham Station, delivering the survivors to an amazed group of local residents, fishermen, and fellow Coast Guardsmen on the pier.   Later that year, BM1 Webber and the other three Coast Guardsmen from the CG 36500 were awarded the Coast Guard Gold Medal for Valor, its highest award.  Three of the four brave men are now deceased, and motor lifeboat CG 36500 was stricken from the rolls in 1968.  The lifeboat, though, has been fully restored and is lovingly maintained by the Orleans Historical Society at Rock Harbor in Orleans, Massachusetts, not far from where it served in Chatham in 1952.