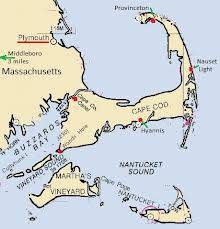 The Cape Cod Canal is a seven-mile long sea level canal connecting Cape Cod Bay to the north with Buzzards Bay to the south.  Maintained by the US Army Corps of Engineers (USACE), it has a minimum channel width of 480 feet and an authorized depth of 32 feet at mean low water.  The Canal is spanned by two highway bridges and one railroad bridge, providing an air draft of 135 feet at mean high tide.  The swift-running Canal current changes direction every six hours, reaching a maximum velocity of five knots during the ebb or westerly tide.  Use of the Canal shortens the distance between Long Island Sound and Boston by 135 miles and allows vessels to avoid the hazards of sailing in the North Atlantic to get around Cape Cod, which can be particularly treacherous during the winter.  The Canal also proved its worth during the two world wars, when vessels operating off the Cape were vulnerable to attack by German U-boats.  An artificial waterway connecting the Scusset River flowing into Cape Cod Bay and the Manomet River flowing into Buzzards Bay was first considered by Miles Standish of the Plymouth Colony in 1623.  The two rivers were separated by only one mile of land rising to a maximum height of 33 feet.  Various proposals for a canal were made over the years, but construction only began in 1909 under the direction of August Belmont Jr’s Cape Cod & New York Canal Company.  After overcoming numerous engineering problems, the Cape Cod Canal opened to traffic on 29 July 1914 as a privately-owned toll canal.  At that time, it had a maximum width of 100 feet and a maximum depth of 25 feet.  Tolls failed to meet the investors’ expectations.  On 21 July 1918, a German U-boat shelled a tug and its four barges rounding Cape Cod near Orleans.  Four days later, President Wilson issued a Proclamation taking over the Canal and assigning operational authority to the USACE.  In 1928, the federal government formally purchased the Canal for $11 million.  It was eventually widened and deepened.  In addition, the southern entrance to the Canal was realigned.  Approximately 20,000 vessels transit the Canal annually.  Subsequent to a major oil spill in Buzzards Bay in 2003, most large tank barges transiting Buzzards Bay and the Cape Cod Canal are required to have a tug escort in addition to the primary towing vessel.