Battle of the Yellow Sea

The first battle between squadrons of modern steel-hulled battleships 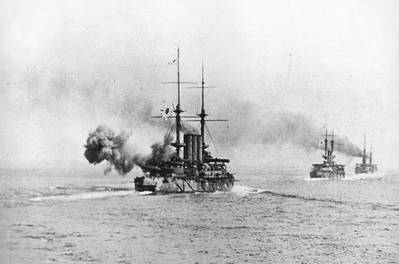 The Russo-Japanese War of 1904-05 was, in many ways, the first modern war.  It saw use of machine guns, rapid-firing artillery, and trench warfare.  The navies of both combatants were also equipped with some of the first modern steel-hulled battleships.  Imperial Russia’s First Pacific Squadron, comprised of six battleships, four protected cruisers, and 14 destroyers, had been trapped in Port Arthur since the war began.  As the Japanese Army closed in on Port Arthur, it became vital to get the ships out and united with the other Russian squadron in Vladivostok.  The Imperial Japanese Navy forces, consisting of four battleships, two armored cruisers, eight protected cruisers, 18 destroyers, and 30 torpedo boats, were in the Yellow Sea, blockading the port.  At about dawn on 10 August 1904, Russian Admiral Vitgeft led his forces out of Port Arthur, first feinting to the southwest and then steaming at high speed to the southeast and the open sea.  Once it was apparent to Japanese Admiral Togo that the Russian were making their long-awaited breakout, he first positioned his battleships west of the Russians so as to prevent a return to port and then began a long stern chase.  The battleships commenced firing in the early afternoon when within eight miles of each other, the extreme limit of their twelve-inch main batteries.  This was beyond the effective use of their optical range-finders, so the gunnery exchanges were largely ineffective.  This gradually changed as the two squadrons closed on nearly parallel courses.  While both squadrons were absorbing hits, neither was suffering major damage and the Russians were making progress toward the southeast.  Everything changed with two lucky hits by the Japanese.  One shell overshot the Russian battleship Peresvet, but succeeded in cutting the foremast, thereby preventing Rear Admiral Prince Pavel Ukhtomsky, the squadron’s second in command, from hoisting signal flags.  Another shell, at almost the same time, struck the bridge of the flagship Tsesarevich, instantly killing Admiral Vitgeft and his command staff.  This shot also killed the helmsman and jammed the ship’s wheel in a hard turn to port.  The other Russian battleships initially tried to follow the flagship’s maneuver, but then realized that the flagship were out of control.  Unfortunately, they received no effective signals from the new flagship and were now out of formation.  As the Japanese battleships approached, the Russian battleship Retvizan suddenly charged.  The Japanese ships backed off long enough for most of the Russian ships to return to Port Arthur in the darkness.  The result was a tactical stalemate, with the Russians having one battleship severely damaged and the other five slightly damaged.  The Japanese had two battleships severely damaged and one slightly damaged.  Strategically though, this was a Japanese victory.  The Russian squadron remained in Port Arthur until that enclave fell, when all Russian ships were sunk, scuttled, or captured.