Battle of the Saintes

A major victory for the Royal Navy in 1782 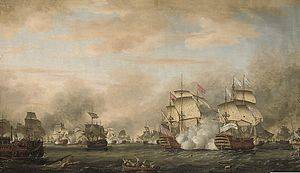 After the French fleet under Admiral Comte de Grasse deterred the Royal Navy from relieving General Cornwallis at Yorktown in 1781, it sailed to the Caribbean to put continued pressure on British interests in the Americas.  The sugar plantations in Jamaica brought more profits to Britain at the time than the entire Thirteen Colonies, whose only real export was tobacco.  French forces led by the Comte de Grasse attacked the British islands of St. Kitts and Nevis in January 1782.  Rear-Admiral Sir Samuel Hood, with a slightly smaller force, sailed in relief.  Although unable to prevent the capture of St. Kitts, Hood’s forces out-maneuvered those of the Comte de Grasse and achieved a tactical victory in the Battle of Saint Kitts.  Admiral Sir George Rodney returned from convalescence in Britain, bringing with him seventeen new ships of the line, each equipped with copper sheathing of their hulls.  These ships proved to be faster and more maneuverable than their French opponents.  French forces, with their Spanish allies, were planning an invasion of Jamaica in a move to impose severe financial losses on Britain.  On 7 April 1782, thirty-five French ships of the line, under the Comte de Grasse’s command, sailed from Martinique in the prelude to the Jamaican invasion.  On 8 April, Admiral Rodney sailed from St. Lucia to intercept.  The two fleets met the next day off the small Iles des Saintes, between Guadeloupe and Dominica.  For three days, the two fleets in traditional line of battle exchanged long-range fire with minimal effect.  Finally, on 12 April, the wind abated.  This allowed the more maneuverable ships of the Royal Navy to close on the French and eventually break their line.  Four French ships were captured, including the flagship.  Admiral Comte de Grasse was captured and taken to Britain as a prisoner of war, where he was presented to King George III.  When conflict ceased with the signing of the Treaty of Paris in 1783, Admiral Comte de Grasse returned to France, where he faced court-martial, but was acquitted.  Admiral Rodney, on the other hand, was made a peer and was awarded an annual pension of £2,000.