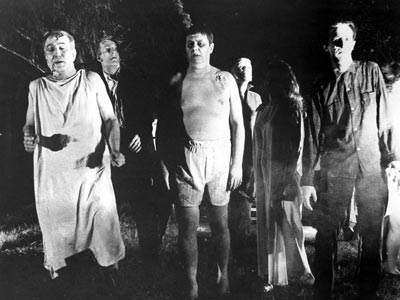 The requirement for scanning of 100% of maritime shipping containers in overseas ports prior to loading on a ship bound for the United States was enacted into federal law (with various caveats) by the Implementing Recommendations of the 9/11 Commission Act of 2007.  This was done even though the 9/11 Commission (officially, the National Commission on Terrorist Attacks upon the United States) never made such a recommendation.  The requirement is due to come into effect on July 1, 2012, although the Secretary of Homeland Security is provided with a certain amount of discretion to extend the effective date in enumerated circumstances.  Contrary to what the statute implies, the 9/11 Commission stated (on page 391 of its official report): Hard choices must be made in allocating limited resources.  The U.S. government should identify and evaluate the transportation assets that need to be protected, set risk-based priorities for defending them, select the most practical and cost-effective ways of doing so, and then develop a plan, budget, and funding to implement the effort.  Exercising infinite wisdom, Congress elected to leap right to the solution (100% scanning), skipping over any threat assessment, diplomatic considerations, engineering evaluation, or cost analysis.  When it turned out that foreign governments strongly opposed the requirement, the equipment selected for scanning would not work, and the budget side of Congress would not appropriate the billions of dollars required, the authorization side of Congress roundly criticized the Department of Homeland Security for dragging its feet.  In any event, it appeared that the 100% scanning requirement would be allowed to die a quiet (and well-deserved) death – until the discovery just prior to Halloween of terrorist bombs in printer cartridges being shipped in air parcels to the United States from Yemen.  Now, legislation is about to be introduced in Congress calling for 100% scanning of material prior to loading on cargo aircraft bound for the United States.  Similarly, efforts are being made to reinvigorate the requirement for scanning of 100% of maritime shipping containers.  Some things never die!