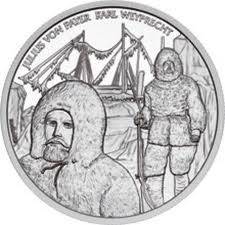 Well into the nineteenth century, many believed that the region of the North Pole was open water, surrounded by floating ice.  If one could only locate an opening in the ice, it would be possible to sail from the temperate region to the North Pole and possibly out the other side.  The last serious attempt to locate such an access point was the Austro-Hungarian North Pole Expedition of 1872-1874.  It was funded by Austro-Hungarian nobles with the backing of Emperor Franz Joseph I.  A bespoke ship was constructed in Bremerhaven, the three-masted schooner Tegetthoff of 200 tons and 120 feet, with a 100 horsepower coal-fired steam engine.  Karl Weyprecht served as master of the vessel and overall expedition leader.  Julius von Payer served as leader of the planned overland (or over-ice) effort.  The schooner with its crew of 24 departed Tromsø, Norway on 3 July 1872, carrying eight sled dogs and supplies for three years.  On 20 August, the schooner was beset in the ice off Novaya Zemlya.  The ice carried the schooner and its crew northwest.  In August 1873, they sighted the mountains of an unknown land.  After some initial exploration, they named the newly found islands Franz-Josef Land in honor of their Emperor.  The ice continued carrying them slowly north.  One crewmember died of scurvy, but the others remained in relatively good health.  Reaching 82°5N, they decided on 20 May 1874 that there was no open water to the north and that the time had come to abandon the vessel and make their way back.  After three months of sledging, they reached open water.  Taking to their boats, they returned to Novaya Zemlya and were rescued by the Russian schooner Nikolay, which took the expedition members to the port of Vardo, Norway on the Barents Sea.  The team returned to Vienna, where they were greeted with great celebration.  A commemorative coin was struck in their honor.  Their observations and scientific work put an end to attempts to find open water in the high Arctic, at least until recently.

Near Misses: Saving Ourselves One Miss at a Time......