Attack on the SS Gulflight

The first US ship to be torpedoed during World War I 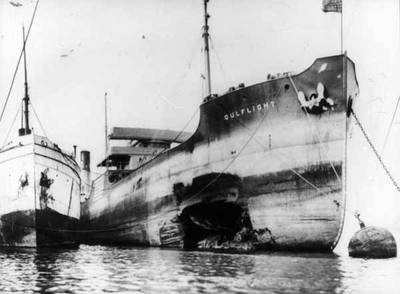 The SS Gulflight, a 5,189-ton petroleum tanker, was launched in August 1914 (almost simultaneously with the outbreak of World War I) and owned by the Gulf Refining Company.  Because the United States was officially neutral, its ships could trade with both the Allied and Axis powers, but trade with the Allied powers predominated.  On 10 April 1915, the SS Gulflight, Captain Alfred Gunther commanding, departed Port Arthur, Texas with a full load of 56,000 barrels of gasoline, bound for Rouen, France.  At a point west of the Scilly Isles, Gulflight was challenged on May 1, 1915, by two British patrol vessels that suspected it of seeking to refuel German submarines operating in the vicinity.  Germany had recently announced a policy of unrestricted submarine warfare.  Gulflight was ordered to accompany the patrol vessels into port for examination.  The patrol vessels took up station on either side of Gulflight.  At about 1:00 pm, the German submarine U-30 surfaced ahead of the ships and ordered them to stop.  One of the patrol boats attempted to ram the submarine, which quickly fired a torpedo and submerged.  The torpedo struck Gulflight in the starboard bow.  Fearing that the tanker was sinking, the crew abandoned ship.  All but two of the crew were taken onboard one of the patrol vessels.  The bodies of those two were never recovered.  Captain Gunther died of a heart attack while onboard the patrol vessel.  The chief officer and the chief engineer returned to Gulflight, which was towed into port in the Scilly Isles, where some of her cargo was lightered off.  Gulflight then proceeded under her own power to Rouen to deliver the remaining cargo.  She then went to Newcastle-on-Tyne for repairs before returning to service.  The United States filed a diplomatic protest regarding the attack on Gulflight.  The German government submitted an apology for the incident.  On 7 May 1915, another German U-boat torpedoed and sank the British passenger ship Lusitania.  Among the 1,198 passengers and crew lost were 128 US citizens.  In response to the inflamed passions aroused within the American public over the incident, Germany rescinded for a time its policy of unrestricted submarine warfare.  Shortly after the policy was reinstated, the United States declared war against the Axis powers.  Gulf Refining sold Gulflight in 1937.  On 26 January 1942, under the name Refast, the tanker was sunk by a torpedo fired by a German submarine while in the North Atlantic south of St. Johns, Newfoundland.