Author of the first major strategic analysis of sea power 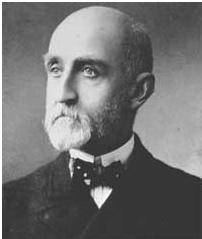 Alfred Thayer Mahan (1840-1914) was born at West Point, where his father was an instructor.  After graduating with distinction from the US Naval Academy in 1859, he served blockade duty on a number of warships during the Civil War.  Mahan was promoted at, for its period, a rapid pace based largely on his widely-recognized intellect.  In 1885, he was promoted to Captain and assigned to the Naval War College in Newport, Rhode Island.  He spent that first year, though, at his home in New York City, where, at the recommendation of College President Rear Admiral Stephen Luce, he researched the influence and importance of sea power.  Professor Mahan’s seminal work – The Influence of Sea Power upon History, 1660-1783 - was published in 1890 to widespread acclaim.  His strategic view of world history was largely unprecedented and dominated planning by the navies of the United States, the United Kingdom, Germany, and Japan for decades.  He argued forcefully that no nation could be great if it was not also a sea power.  This meant strong maritime lines of commerce during peacetime and domination of vital sea lanes and chokepoints during wartime.  The nation that controlled the seas controlled its own destiny.  He called for construction of a strong force of battleships and a concentration of that force so that, wherever it was deployed, it would prevail.  Mahan also called for establishment of strategic coaling stations around the world to fuel the fleet.  He recommended the annexation of Hawaii, in part to prevent Japanese influence from dominating the Pacific.  Mahan’s writings played a major role in the development of the German Imperial Navy in the period leading up to World War I.  His genius is still recognized today, but his doctrine is tempered changes in technology (e.g., submarines and aircraft), recognition of the value of combined operations between the military services, and the rise of geo-politics.