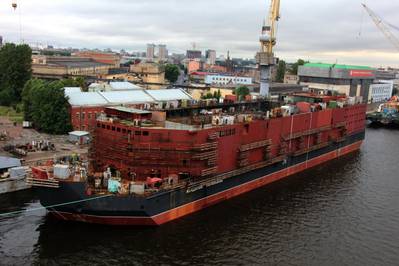 The Akademik Lomonosov is a large (474 feet long by 98 feet wide) barge being constructed in St. Petersburg, Russia as a nuclear power plant.  It is named after the scientist and writer Mikhail Lomonosov (1711-1765), who, among other things, discovered the atmosphere of Venus and was a noted poet.  When finished, barge will carry two modified KLT-40S naval propulsion reactors providing up to 70 MW of electricity or 300 MW of heat and be operated by a crew of 69 technicians.  The reactors have been lifted onboard, but are not yet operational.  Plans call for the barge to be towed from St. Petersburg, around the Scandinavian Peninsula, and along the Northern Sea Route to the coastal city of Pevek on the East Siberian Sea.  There it will be connected to the power grid, replacing the old and heavily polluting Chaun thermal power plant.  A second floating nuclear power plant is scheduled to follow in 2019.  Pevek, with a population of about 7,000, is the administrative center of Chaunsky District of the Chukotka Autonomous Okrug, Russia.  It serves as the port for export of minerals, including uranium, tin, and mercury, mined in northeastern Siberia.  The city is increasingly important as the Northern Sea Route opens to ever more marine traffic.  During the period of the Soviet Union, the area was used to house prisoners in the Gulag system, where they were forced to work in the mines under very harsh conditions.  The port is now the eastern base of the Northern Sea Route’s Marine Operations Headquarters, with an icebreaker homeported there.  Currently, coal is imported into Pevek, primarily to supply the thermal power plant.  These imports will decrease once the nuclear power plants come on line in 2016.  The major power consumers in Pevek are the mineral processing plants.

Where Do Ports Fit in California's Environmental Regulatory Vision?