The wartime Commandant of the US Coast Guard 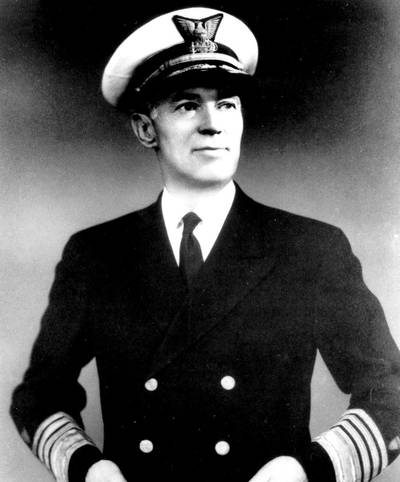 Admiral Russell R. Waesche, Sr. (1886-1946) served as Commandant of the United States Coast Guard from 14 June 1936 until he retired on 31 December 1945, the longest tenure as Commandant in USCG history.  He entered the US Revenue Cutter Service School of Instruction at Arundel Cove (Curtis Bay), Maryland in 1904 after completing one year at Perdue University.  Commissioned a Third Lieutenant (Ensign) on 27 October 1906, he served on cutters in the North Atlantic, the Great Lakes, and the Pacific Northwest in his first five years.  In October 1911, he took command of the Revenue Cutter Arcata in the Pacific Northwest, followed a year later with command of the Revenue Cutter Pamlico.  In February 1915, Waesche was assigned to headquarters in Washington, DC where he was involved with the Revenue Cutter Service’s merger with the Life-Saving Service to create the US Coast Guard.  In 1916, he became head of the Communications Division.  The end of World War I was followed quickly by passage of the Eighteenth Amendment and the National Prohibition (Volstead) Act.  The Coast Guard was tasked with intercepting “rum runners”.  Waesche commanded various cutters until March 1928 (during which period he was promoted to the rank of Commander), when he was again assigned to Headquarters, this time as Chief Ordnance Officer.  In 1932, he developed the plan for the reorganization of Coast Guard field forces. Later, he developed plans to integrate the Coast Guard into the Navy in the event of war and to regularize the selection of commissioned officers.  In 1935, he was assigned as aide to the Commandant, Rear Admiral Harry G. Hamlet.  He then served as Chief of the Finance Division and later as Assistant Commandant.  When Hamlet retired on 14 June 1936, Waesche was appointed Commandant and promoted from Commander to Rear Admiral.  In 1939, he was responsible for integration of the Lighthouse Service into the Coast Guard.  He also organized civilian volunteers, initially called the Coast Guard Reserve, but later renamed the Coast Guard Auxiliary.  With US entry into World War II, Waesche oversaw the integration of Coast Guard military forces into the US Navy and the creation of the Women’s Reserve (popularly known as the SPARs).  He insisted, though, that the Coast Guard’s non-military missions, such as aids to navigation, marine safety, and law enforcement, be administered by the Commandant reporting to the Secretary of the Navy, not the Chief of Naval Operations.  Once the war was successfully concluded, he insisted that the Coast Guard be promptly returned to the Department of the Treasury.  In March 1946, President Truman nominated ten flag officers of the US military forces to retain their wartime ranks and serve as elder statesmen for national defense issues.  Admiral Waesche was one of those so designated.  He died on 17 October 1946 due to complications of leukemia.  The cutter USCGC Waesche (WMSL 751) is named in his honor.