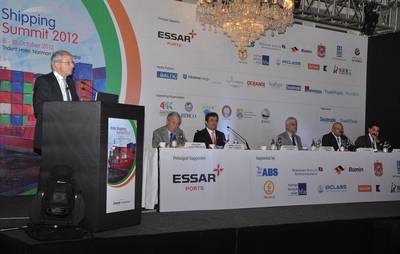 Acknowledging the economic downturn that has spread gloom in most spheres of activities, factoring in low key performances and struggles of stakeholders to remain afloat, the recently concluded India Shipping Summit 2012, held last week in Mumbai preferred to focus on the unlimited opportunities that exists for the industry to avail of and the alternatives still open to various players to come out of the red.  Against the backdrop of sharp falls in freight rates, oversupply of tonnage, the slower rate of growth in India and the global economic depression, there were many positive perspectives put forward by the participants.

S Hajara, Chairman & Managing Director, The Shipping Corporation of India Ltd, in the inaugural session contented, “Although dry bulk will take longer to recover, if China comes back on track and the US maintains its current course, a recovery in other sectors could begin in mid 2013”. Presenting his thoughts about India’s economic position from the global perspective he said, “The world cannot ignore China and India, as the majority of the world’s coal demand will come from these two nations in the next few years. Emerging economies cannot be suppressed much longer”. He also reminded delegates that long haul shipping is by far the most economical and eco-friendly mode of transport in the world.

Philippe Louis-Dreyfus, President, Louis Dreyfus Armateurs, provided an ‘outside’ view of India. His company has invested more than $100 million in India and has more investment planned in the short term. Their aim is to double their capacity in the next two years.

He went on to highlight some of the key areas where he feels India has high potential. “India is well known for IT Services” he argued “Why shouldn’t it be known as a 'high value added services' provider in shipping?" By which he meant services such as cabling, seismic, specialized cargo carrying, etc.

Dreyfus also felt that European partners could play a vital role in India’s development, joining together strong skill sets from both sides, with reference to India’s strong seafaring contingent.

Jamal Majid Bin Thannah, Vice Chairman, DP World & Group CEO, Port & Free Zone World, updated the conference on trade in the Middle East. Their economic yardstick is often judged by the Sheikh Zayed Road, one of the key transport road arteries. If it’s busy, trade is good. And the last two weeks it has been reported to be very congested. Speaking from a global viewpoint, he predicted that there will be a new dimension and structure to world trade in the short to medium future, as the advanced economies compete with the emerging markets. There will be an emergence of new hubs and new shipping lines - and Asia and India will be where the growth is over the next 30 years.

It was Yudhishthir Khatau, Vice Chairman & Managing Director, Varun Shipping Company Ltd, who neatly summed up the pivotal elements of the shipping market. He sees the industry as having three vital ingredients, “the three Cs of shipping, Cargo, Capability and Capital”. He went on to say that “India is a tremendous source for cargo for the world together with future energy growth potential.”

In the second of the Cs, “The country’s capability can be seen in its history and in its seafarer resource. India’s global share of seafarers has risen from 3% to 6% in the last year.”

However when it comes to capital, he conceded that the country is not well placed. The cost of debt has become more expensive and is not the best country for financial capital.

More positives for India’s economy were provided by Philip Embiricos, Director, Embiricos Shipbrokers Ltd. He pointed out another advantage that India has over China is a young population. He quoted “60% of the Indian population is under 30 years old and 60% of China is over 60 years old”. Combine that with a population growth rate that will soon overtake China, India has the potential to become the global reservoir for shipping.

Many delegates felt that the summit was one of the best since its launch in 2005, largely attributable to the range of different speakers who brought fresh perspectives and subjects to the forum. It was certainly an interesting two days listening to global industry leaders coming together in Mumbai in search of opportunities and new strategies in today’s difficult operating conditions.